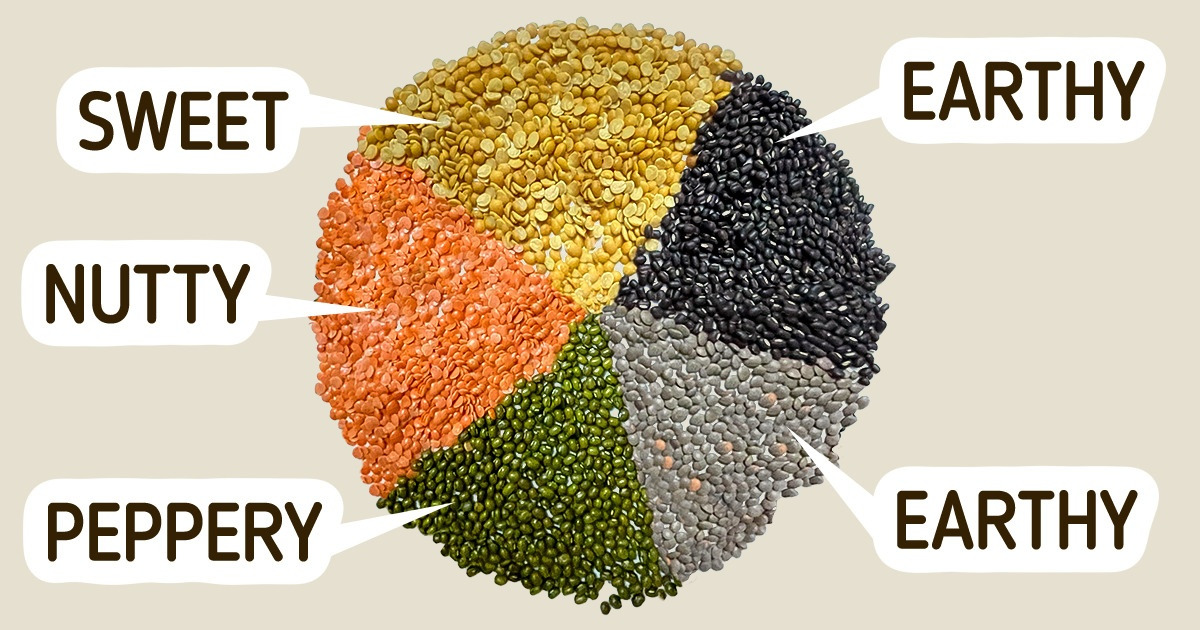 In Indian cooking, dals are the dried lentils and pulses. Dals are versatile, they can go in soups, dips, stews, salad, and much more. And, the best part is, they’re cheap as well. However, not all dals look and are cooked in the same way. There are a wide variety of dals available, and it is very common to confuse all of them. So, 5-Minute Crafts is here to clear all the dilemmas about these legumes so you don’t have to call your mom, again and again, to confirm if you’re cooking the right one.

These are the most common types of lentils. Its subtypes are available in khaki brown to dark brown shades. They are also called by many names, such as European lentils, kali masoor in India, or simply lentils. They take about 20-30 minutes to cook and leave a mild earthy flavor in soups and stews.

Red lentils are not really red, but more in the orange shade. They are also termed split lentils, Egyptian lentils, or lal masoor dal in India. These lentils have their coats removed so they can be cooked in 10 minutes and they become very mushy. And because of this reason, they can turn into a velvety dal when cooked on a simmer gas, with flavorful spices, and a little bit of cream. It also makes them ideal for soups, stews, dips, and more. This dal leaves a nuttier and sweeter taste when cooked.

Green lentils are of the same size as brown lentils but they have a glossy surface. They are also called mung dal in India. They take a long time, around 45 minutes to cook. These lentils are ideal for salads because they retain their shape after cooking and they have a peppery and sometimes earthy taste and texture.

Black lentils look like caviar, and hence they got a cute nickname called Beluga. They are also called urad daal in India. Black lentils can be cooked in 20-30 minutes. They also retain their shape when cooked like green lentils and are ideal for salads and side dishes. Black lentils give an earthy taste to the dishes.

Yellow lentils are also called toor dal in India. These lentils are milder and sweeter in taste when compared to brown lentils. They are available not only in yellow shades but also in orange and golden-red too. When cooked, yellow lentils become so mushy that it makes them ideal for thick soups and stews. These lentils take around 15-20 minutes to cook.

Kidney beans are also called Rajma in India. They’re available in cans or in a dry form where you have to soak them for a few hours until they become tender. These beans are very popular in North India, giving rise to a famous dish called rajma chawal (or rajma rice). You can add them to salads or to meats and veggies as well.

Chickpeas are usually larger than most types of lentils. They are also called garbanzo beans or chole in India. Dried chickpeas take around 40 minutes to cook because they have a hard texture so the cooking time is longer as well. Canned chickpeas can be eaten or served without cooking. In North America, chickpeas are usually served as hummus. In India, chickpeas are used in masala dishes where they are combined with meat and lots of spices for a delicious serving.