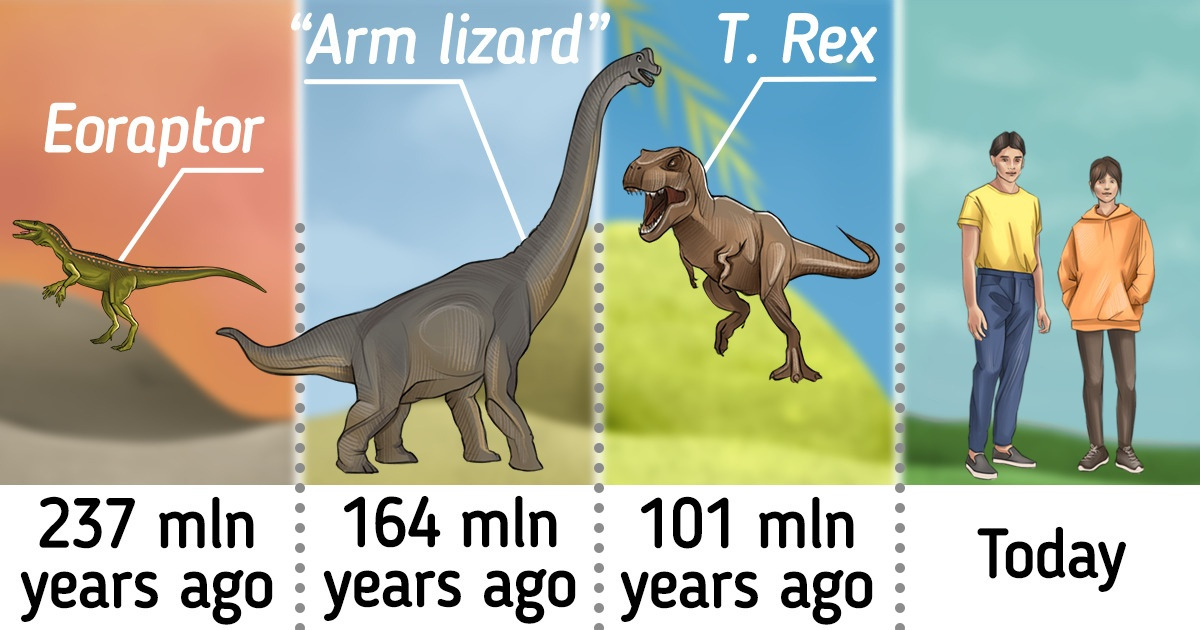 A Guide to the Different Types of Dinosaurs

The first dinosaurs appeared in the Late Triassic period over 240 million years ago, when there was only one giant continent named Pangea. There were many different species of dinosaurs, more than 700. Although dinosaurs are now extinct, many animals like lizards, turtles, snakes, and crocodiles descend from them.

5-Minute Crafts made a list of these fierce creatures so you can pick your favorite.

Timeline and types of dinosaurs

The first dinosaurs appeared in the Late Triassic Period (in the Mesozoic Era that came after the Paleozoic Era). They were dominant until the Late Cretaceous period after which the Cenozoic Era started.
Here is the exact timeline:

The dinosaur classification is very complex, as it includes many different genus, species, and families. Here is the simple classification of dinosaurs based on their appearance and eating habits:

5. Thecodontosaurus: these small bipedal dinosaurs were one of the first dinosaurs to be discovered. Their diet consisted mostly of plants, but they were probably omnivores. Unfortunately, many fossils of the Thecodontosaurus were destroyed during World War 2.

6. Staurikosaurus: or the “Southern Cross lizards” were carnivorous, small, agile, and quick, which allowed them to catch tiny prey.

5. Sarcosaurus: A small theropod dinosaur that feasted on meat.

6. Vulcanodon: This was a small sauropod that walked on 4 legs and had a long neck and a tail. Vulcanodons were herbivores.

5. Monolophosaurus: This dinosaur was a large carnivore and had a bony crest on the top of its head.

6. Shunosaurus: A medium-size sauropod with a tail ending with 2 spikes, that looked like a club, probably to defend itself from predators.

5. Gargoyleosaurus: This herbivore was one of the first known armored-type dinosaurs. It moved on 4 legs and had plates on its head and body.

6. Stegosaurus: Another 4-legged herbivore with distinctive armor on its back. The armor consisted of kite-shaped plates that were positioned upright on their back and they also had spikes on their tails.

5. Dinosaurs in the Early Cretaceous Period (145 to 101 million years ago)

5. Iguanodon: They were herbivores that could walk on 2 or 4 legs and had teeth similar to an iguana, but bigger. Also, scientists believe they had long tongues due to the muscle structure inside their head.

6. Microraptor: A small carnivore that had feathers on all 4 limbs. Scientists believe that this dinosaur was probably capable of gliding through the air which supports evidence about the evolutionary connection between birds and dinosaurs.

6. Dinosaurs in the Late Cretaceous Period (101 to 66 million years ago)

5. Avimimus: This omnivore dinosaur was named after its many bird-like characteristics. It was small with a beak similar to the ones that parrots have.

6. Bambiraptor: Another dinosaur that resembled a bird, walked on 2 legs, and ate meat. It probably had feathers and could run as fast as a chicken.

7. Carnotaurus: A large, meat-eating theropod that could probably run very fast on its 2 legs. It had 2 thick horns above the eyes, which was uncommon to see on carnivorous dinosaurs.

8. Corythosaurus: Herbivorous dinosaur that had a crest on its head that resembled a Corinthian helmet from ancient Greece. Researchers believe that the function of the crest was to make sounds.

9. Parasaurolophus: This herbivore was a hadrosaurid, a member of a dinosaur family that had various head enhancements like crests, spikes, or tubes. Parasaurolophuses had a very long, crested tube which they probably used for communication.

10. Prenocephale: An ornithopod that had a helmet-like head and ate plants. Their skull was round and sloping.

11. Spinosaurus: This was the largest terrestrial carnivore. Spinosaurus had a sail-back feature and a long, narrow jaw, similar to a crocodile’s mouth.

12. Triceratops: A very recognizable dinosaur, with a bony-frilled skull, with 2 horns emerging from the brow area and one horn in the nose area. The puncture marks that were found on one of the frill fossils show that they used their horns to fight other Triceratops or fend off attacks from Tyrannosauruses.

13. Tyrannosaurus: Probably the most reputable dinosaur and one of the biggest theropods that ever lived. This 2-legged carnivore had a massive and powerful jaw with 60 teeth that could crunch through the bones of Triceratops. Although Tyrannousauruses had a very muscular physique, they weren’t very fast as often depicted in popular movies.

14. Velociraptor: This dinosaur was roughly the size of a turkey and had a long skull with serrated teeth. Although this carnivore had feathers, it couldn’t fly.

Please note: This article was updated in May 2022 to correct source material and factual inaccuracies.
----
5-Minute Crafts/Animals/A Guide to the Different Types of Dinosaurs
Share This Article
You may like these articles