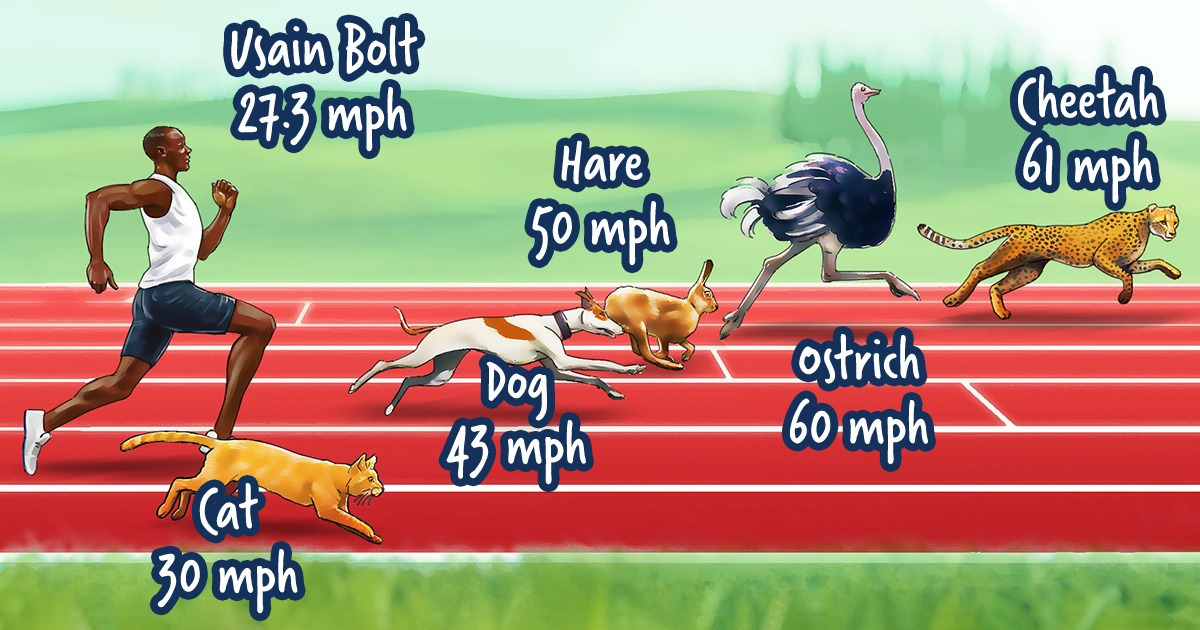 The Fastest Runners in the World

When we decide to go for a run, it seems to us that we move relatively fast. Everything around us flickers, and the time it takes us to get from point A to point B is much faster than if we were walking. The Olympic champion Usain Bolt can run at the speed of 27.3 mph. Isn’t that impressive? But it’s hard to even imagine what speeds animals can run if they want to. Even dogs can reach a speed of up to 45 mph.

Today, we at 5-Minute Crafts decided to find out what other representatives of the animal world can move with impressive speed. Spoiler: We didn’t expect them to be so fast!

The top of this list is occupied by the cheetah. We all probably know that the cheetah is the fastest land animal. It is capable of running at around 61 mph. It’s their body structure that helps them do it — a light body, thin long legs, and a long tail.

As you know, ostriches can’t fly but they can run very fast — at a speed of up to 60 mph. Also, these big birds are the heaviest in the world and they lay the biggest eggs in the world. There are only 2 types of ostriches on our planet — common and Somali.

These animals are technically called Pronghorns, but the name “Antelope” is still firmly attached to them even though they are not antelopes at all, just an animal that is very similar to it. Pronghorns can run at speeds of up to 55 mph, but only for short distances.

This majestic big cat is not always calm and sedate as it might seem at first sight. If necessary, lions can develop speeds of up to 50 mph. But it is difficult for them to maintain this speed for a long time, so lions, as a rule, first get very close to their prey, and only then do they start their quick attack.

These shy big-eared animals are known for their quick speeds. Their strong hind limbs help them reach speeds of up to 50 mph over short distances (like many other animals described in this article). Hares can run longer distances at an average speed of around 35 mph.

Seemingly clumsy and sluggish bears can actually develop speeds of up to 30 mph. The brown bear is one of the largest predators on the planet and can compete, in size only, with its “brother” — the polar bear.

How about pets? Of course, they can’t break the speed records held by ostriches and cheetahs but they have something to surprise you with as well. Let’s take a closer look at them: