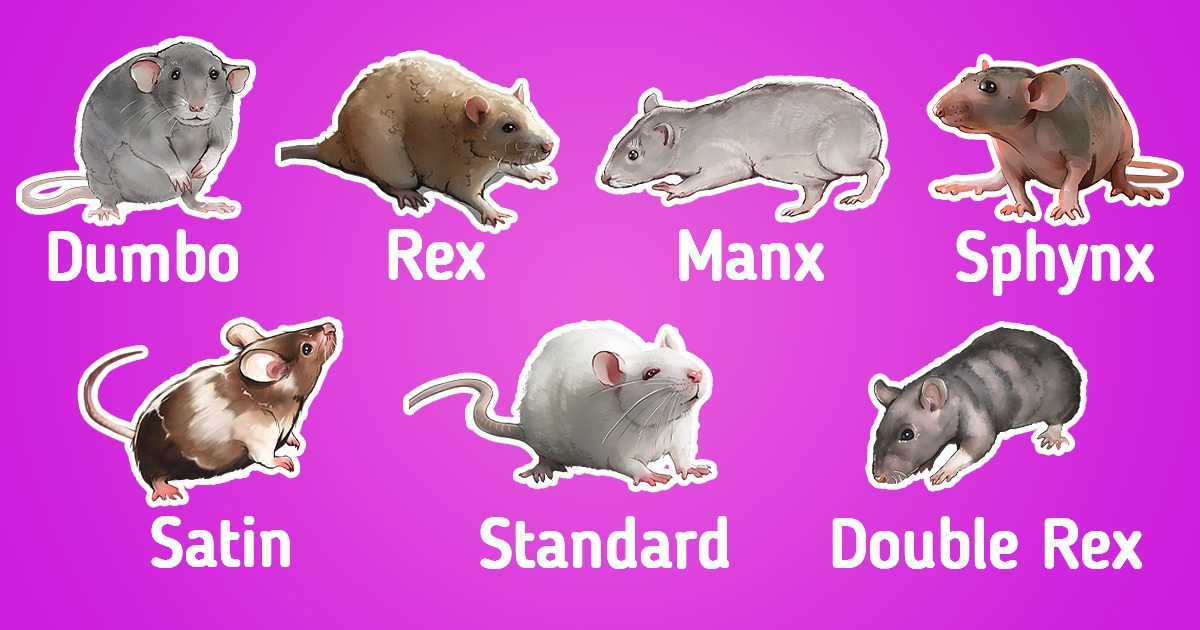 Rats are intelligent and sociable animals that can become great pets with proper care.


5-Minute Crafts would like to tell you about popular types of rat breeds that you can keep as pets.

Standard rats are as close to wild brown rats as possible. These rats have small ears, typical of the wild species, located right behind the eyes and on the top of the head. They have a broad, rather slender body, a long, thin tail, and smooth, straight whiskers. The coat can be white, black, or dark brown.

Standard rats are very intelligent in nature and, if taken good care of, are also very friendly.

Unlike the standard rat, the Dumbo rat has large round ears that are slightly lower down on the head. Because of their position, the head of these rodents seems larger and rounder than it really is. The body of Dumbo rats is more stocky, the fur is thin and short, and there are many color variations of the coat. The most popular colors are white, gray, light gray, and light brown.

Some owners believe that Dumbo rats are friendlier and have a longer lifespan, although this is not always the case. The lifespan and friendliness of this rat are usually inherited and depend on how well the pet is cared for.

The distinctive feature of the Manx rat is the lack of a tail. Many rats of this breed are born completely tailless, however, some rats can have a very short tail.

Manx rats are much smaller than standard rats, and their bodies are shorter and rounder. Due to the lack of a tail, which is used by rats to balance and regulate body temperature, Manx rats are more prone to certain diseases. Before you decide to get such a pet, make sure that you can provide it with the proper care.

The rex rat is one of the largest domestic rats. These rodents have curly hair and whiskers, and some specimens also have curly eyelashes. The fur of these rats is soft and woolly, but with age, it usually thins out and bald patches appear on the body.

The coat of the double rex rat is so curly and brittle that hairs break and fall off before growing very long. Because of this, it seems that the hair on this rat’s body grows in patches. It’s no wonder they are also called patchwork rats.

The double rex rat has curly whiskers, just like the rex rat.

Sphynx rats are almost completely hairless except for a small patch of curly fur around the whiskers. The color of these rodents is usually pink, black, or gray.

Those who want to adopt a hairless rat should keep in mind that it has rather poor health and requires special care. Since these rodents don’t have hair to protect them from the cold, they can easily catch a cold and get sick. And due to the lack of eyelashes, Sphynx rats are also prone to eye infections.

The satin rat is named this because of its long, shiny coat. When young, it can be difficult to tell the satin rat from other rat breeds. An easy way to do this is to pay attention to the whiskers: in satin rats, they are straight and slightly curled only at the tip.