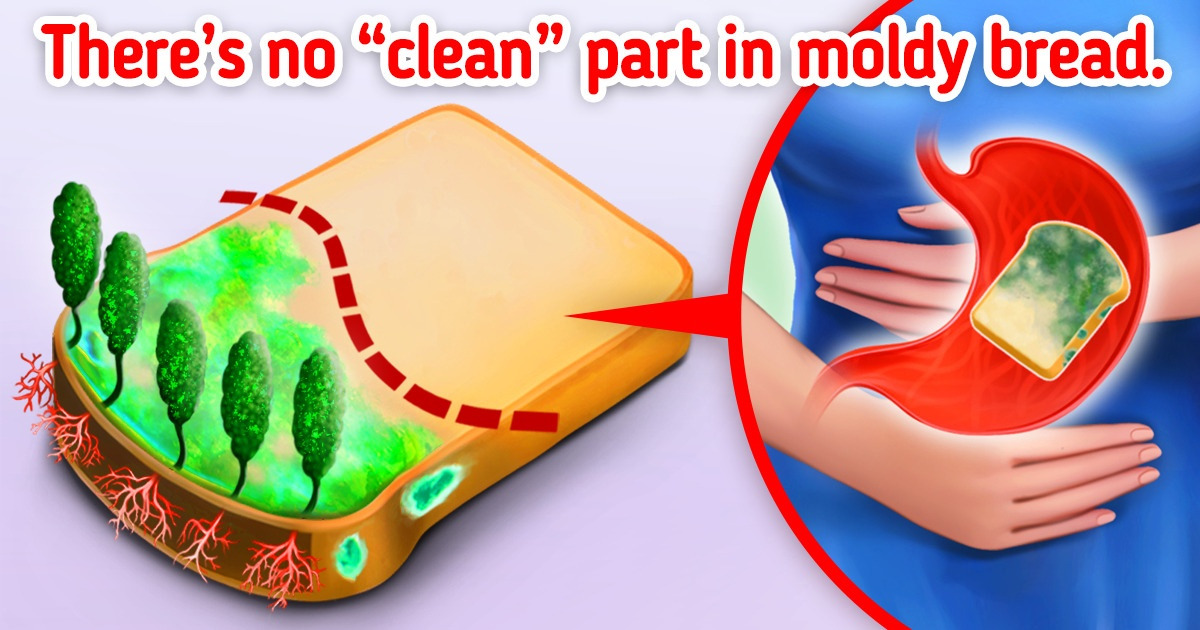 What Happens When We Eat Moldy Bread — And No, You Can’t Just Cut the Moldy Bits Out

We’ve probably all seen mold, as it can make an appearance on cheese, bread, walls, and even the ceiling. When talking about food, it can be present before we can actually see it, especially on fresh food with tons of water. It feels like this nasty stuff is everywhere, but we might not understand it fully.
5-Minute Crafts will tell you all about mold and why it should be avoided.

1. What mold really is

Mold is a kind of fungus that grows in suitable environments, mainly on humid, damp, or decaying organic matter. This fungus exists all over the world, and it doesn’t matter if it’s hot or cold, summer or winter, or inside or outside. Mold can exit on buildings or on food — often consisting of green and/or white fuzzy dots, and it will taste awful.

When it’s dry, mold just floats around in the air all around us until it finally finds a suitable environment to grow on.

2. The different types of mold

It is believed that thousands and thousands of types of mold exist out in the world, and scientists still don’t know how many forms there are, but it’s likely that the number is over 300,000. Some common molds found on meat and bread are:

Although it grows well in moist environments, it also survives just fine on foods with lots of acidic content, like the following:

Mold is constituted by multiple cells as opposed to bacteria, for example, which usually is made of a single cell. These multiple cells form the body of the mold and its spores, which are what give different molds different colors. Looking at mold under a microscope will reveal its construction.

4. What happens when we eat moldy food, and why we shouldn’t

Eating something that has mold on it might not create any reaction in us, or it might give you an instant allergic reaction since some of these molds are very toxic.

And despite what you may have heard, we can’t just cut around the mold that appears on food. While this might be tempting, it’s important to remember that the mold has roots. Even if we cut off every single bit of mold we see and throw it away, the mold can very well still be present, hiding inside the food.

While some mold can be dangerous, the same doesn’t apply to foods that are naturally moldy, like blue cheese, which has a type of mold that originates from a strain that even has antibacterial metabolites and is safe for consumption.

----
5-Minute Crafts/Science/What Happens When We Eat Moldy Bread — And No, You Can’t Just Cut the Moldy Bits Out
Share This Article
You may like these articles