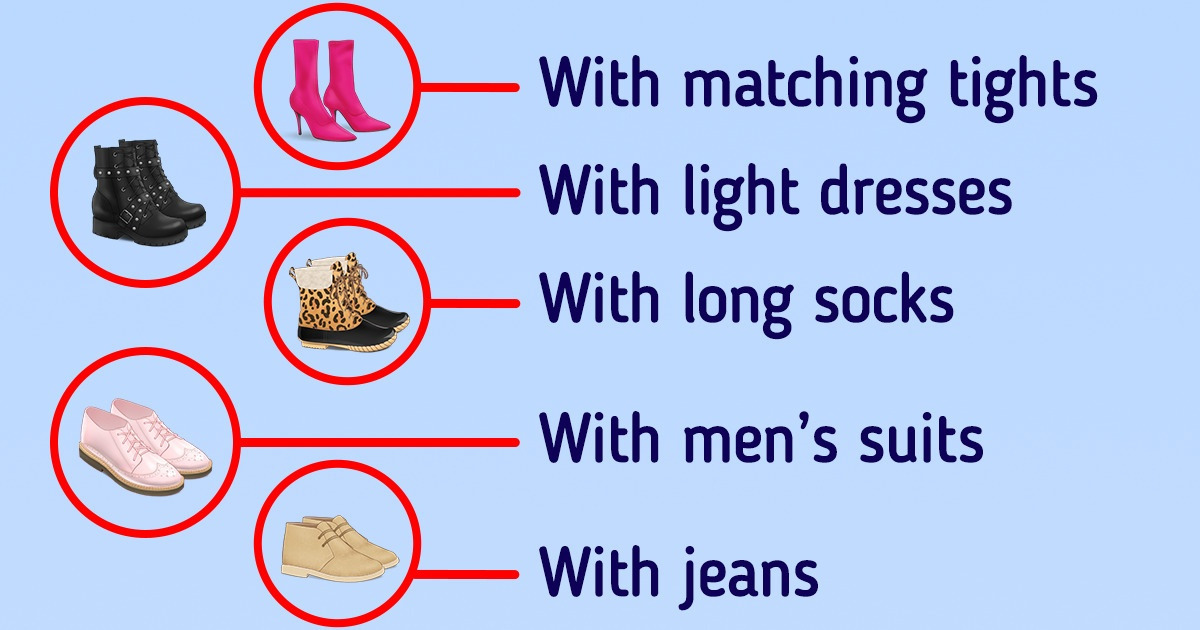 Boots have become an integral part of both men’s and women’s wardrobes. Stores offer us many variations of this comfortable and stylish footwear. However, it’s quite easy to get perplexed by all this diversity.

At 5-Minute Crafts, you’ll learn what types of boots there are and what to wear them with.

Chelsea is a very popular model of boots. Their distinguishing feature is elastic side panels. Chelsea boots don’t have any zippers but they usually have a loop at the back to make it easier to put them on. Most of these boots are ankle height but there are models that are higher or lower than the ankle.

First, Chelsea boots were created by the shoemaker of Queen Victoria, J. Sparks-Hall in 1851. At that time, they were meant for riding horses. The boots got their name a bit later in honor of the district in London, called Chelsea. It was there that they gained special popularity in the 1950s and ’60s.

Chelsea boots with rough soles are one of the more popular shoe trends of 2022. In the new season, it is suggested to wear them with jeans, leather and textile trousers, trendy skirts, and light dresses.

Combat boots remain popular each season, perfectly matching trends. They have a chunky sole, ankle support, and oftentimes, a lace-up front. There are many waterproof models, great for donning in bad weather conditions.

In 2021, black and matte white combat boots on a chunky sole were at the peak of popularity. It’s recommended to bravely combine such footwear with items from your wardrobe. They are worn with jeans of different lengths and styles, which can be tucked in or lowered over the shoes if the model allows. These boots also go great with a little black dress or a sweater dress. A thin chiffon or slip dress looks especially gentle and stylish with these rough shoes.

Ankle boots are boots that reach the ankle. Most of them are zipped on the side or at the back. Ankle boots can have a high heel or a flat sole and can have an open or closed-toe tip. They are often decorated with metal buckles, patterned leather, or studs. These are great shoes for the off-season, that is, for the transition from summer to fall and from winter to spring.

At first, ankle boots were introduced in 1804 and were originally made from satin and silk. These boots have their popularity and made it back on the trendy scene numerous times. And today, they are trendy again.

You can choose ankle boots that will perfectly fit into your everyday style and will go well with jeans and a T-shirt. At the same time, they can be worn with a dress and look festive and elegant.

Lita boots stop at the ankle and rest on a high heel and a massive platform. They also have a lace-up in front and a wide heel. They became popular thanks to the shoe brand, Jeffrey Campbell. The peak of their popularity was in 2010. Lita boots were worn with dresses, skirts, shorts, leggings, tight jeans, and loose trousers.

Timberlands are yellow boots made from nubuck leather with a lace-up created by the shoe company, Timberland. Today, this design can be seen in many brands. Initially, these boots were meant for walking, but today, these shoes are popular not just for their practicality, but also for a certain style.

Timberlands are durable and waterproof outdoor shoes that you can wear comfortably on any terrain. These boots look rather rough because they were originally made for men. However, today, the market offers women’s Timberlands, including models with heels.

Wedge ankle boots can vary in height and in style, but all of them have one common feature: a narrower platform at the bottom.

In recent years, the interest in this type of footwear has decreased, but last fall, they made it back to the peak of trends. This fact is connected with trends for stylish minimalism. Designers have presented wedge boots with round, square, and pointed toes in their collections.

Wedge boots go well with tight jeans and leggings as well as midi and max skirts. This footwear looks great with wool tapered pants paired with a not-too-bulky sweater.

Sock boots are a type of 2-in-1 sock-and-shoe combo. They are worn like shoes and are snug at the top of the leg, like socks. These boots can be of any height, but mid-calf models are the most popular.

Sock boots can be worn both with jeans and a T-shirt or a dress. You can check whether they will suit your outfit using the following trick: if ankle boots are not something you would wear in this look, then sock boots will likely not match this look either.

These shoes are often used for creating a “seamless” look, great for wearing with leggings or tights and a skirt. In this case, the boots smoothly “flow” into the clothes, making the entire look whole. However, it is important to choose the right tights or leggings so that they don’t make the legs look curvier and shorter. In order not to be mistaken, choose tights that match the boots in color.

One should be careful when buying such boots. They should not cut into the skin or cause any discomfort. For wide calves, look for models with a well-stretched shaft. If it’s the first time you’re choosing such footwear, it is recommended to pay attention to neutral shades, such as beige and black. If you want something more daring, feel free to go for a red hue.

Desert boots are ankle-height boots with a lace-up in front. They are durable, lightweight, and have a flat crepe sole. Deserts first appeared in North Africa. They gained popularity among the British soldiers who went on campaigns in the desert. That’s where Nathan Clark, the manufacturer of Clarks shoes, first saw these boots. After having returned to England, he created the desert boots that we are used to seeing nowadays.

These boots are made from soft suede. The most popular colors are different shades of brown, black, and gray. The soft crepe outsole of the deserts gives you extra comfort when walking.

Chukka are ankle-height boots with a rounded toe. They can be made from leather or suede. Chukkas have open lacing, which should have no more than 3 loops.

These boots became popular after 1924 when the Duke of Windsor wore them to a polo game in the US. And they got their name from a polo game, in which a “chukka” is a period. Initially, this was footwear designed for men, but there are many female models available today.

Today’s Chukka boots go well with a female wardrobe. They can be worn with cargo pants, jeans, and leggings, as well as shirt dresses or light dresses with ruffles. These boots look great with skirts and thick tights too.

Duck boots are footwear that combines a leather upper, insulated liner, and a rubber outsole. They were created by the founder of L.L.Bean, Leon Leonwood Bean, who has sewn the bottom part of rubber boots and the upper part of workers’ boots together.

Duck boots got popular at the beginning of the 2000s — at first among school kids, then among adults. Today, these boots are becoming popular again. They are often worn in cold and humid weather conditions.

It’s recommended to combine these boots with jeans, leggings, or tights with patterns. Fashion experts recommend experimenting with socks, choosing long models that will be visible. For a more conservative style, you can choose a monochrome look and select clothes matching the shoes in color. In addition, you may appear taller and slimmer in this type of outfit.

Brogues are low-heeled boots with a toe cap, the upper of which consists of several pieces of leather decorated with perforations. They got their name from the Gaelic word, “brog,” which means “to pierce.” The history of brogue boots starts in Ireland and Scotland in the sixteenth century.

Initially, they were designed only for the street, and they were worn by working-class men. After, rural gentlemen started to use them as shoes for walking outside the city. However, these boots were considered unsuitable for social and business events. Everything changed in the twentieth century when brogues were taken as a template for fashionable women’s shoes.

Brogue boots look good with denim fabric. Therefore, it’s recommended to wear them with jeans and jeans shorts, skirts, shirts, and jackets. These boots will go especially well with straight models of pants with collars or boyfriend pants. Brogues were originally men’s shoes, so they are perfect for men’s suits and blazers. You can make this outfit look softer with the help of feminine accessories. At the same time, certain models of these shoes fit perfectly into delicate looks, like feminine dresses, skirts, and shorts.

UGG boots are comfortable, as they are warm sheepskin shoes with a synthetic sole. They used to be often worn by surfers in the 1960s in Australia. UGGs became trendy in the US at the end of the 1990s and were worn all over the world by the mid-2000s.

Traditional Australian UGG boots are made from sheepskin and fleece. The seams are often prominent on the outside of the boots. There are models made of kangaroo fur, leather, or synthetic materials as well. The latter is more affordable. The height of these boots can be just above the ankle or reach the knee.

UGGs are trendy again in the new season. It’s acceptable to wear them with athletic gear, jeans, leggings, and even skirts and dresses.

Biker boots are closed footwear on a small heel. They can be of different heights. They used to be made of leather and rubber but are now available in a variety of materials. Initially, these shoes were designed to protect the feet while riding a motorcycle. However, biker boots quickly took a prominent place in the fashion world.

They can be worn not only with jeans and leather leggings but also with midi and maxi dresses, as well as shorter, lighter dresses made from thin, flowing fabrics.

Cowboy boots are boots with an angled heel and a tall shaft. They protect the legs from brush, water, and other hazards while riding a horse, while the special heel keeps the boot secure in the stirrups.

Initially, cowboy boots had a rounded or square toe, which was very comfortable for the feet. But in the nineteenth century, the toe was slightly narrowed to make it easier for a rider to insert their feet into stirrups. In the 1940s, they started to make these boots with a narrow and pointed toe. The trend for these boots came from Western movies. Models of such footwear often have outside stitching. They keep the item’s shape, not allowing the leather to bend.

These boots were worn by cowboys and other riders because they are comfortable for riding. Traditionally, these shoes were made from cowhide. The history of cowboy boots started in the 1800s in the plains and deserts of the mid and far west of the United States. They were inspired by the vaquero-style boots brought to America from Spain in the 1600s.

In 2022, cowboy boots have become trendy again. Modern designers have introduced models in classic and bold shades, some of which are decorated with stunning embroidery. These boots are traditionally worn with skinny jeans and leggings and a plaid shirt tied at the waist. But they can also look great with midi dresses, short patterned skirts, and denim shirt dresses.

Hiking boots have stiff soles designed to have good traction on the surface you are walking on. They also provide ankle support.

These boots take a while to break in. The good thing is that you’ll be able to easily and comfortably walk many miles in them once they form to your feet.