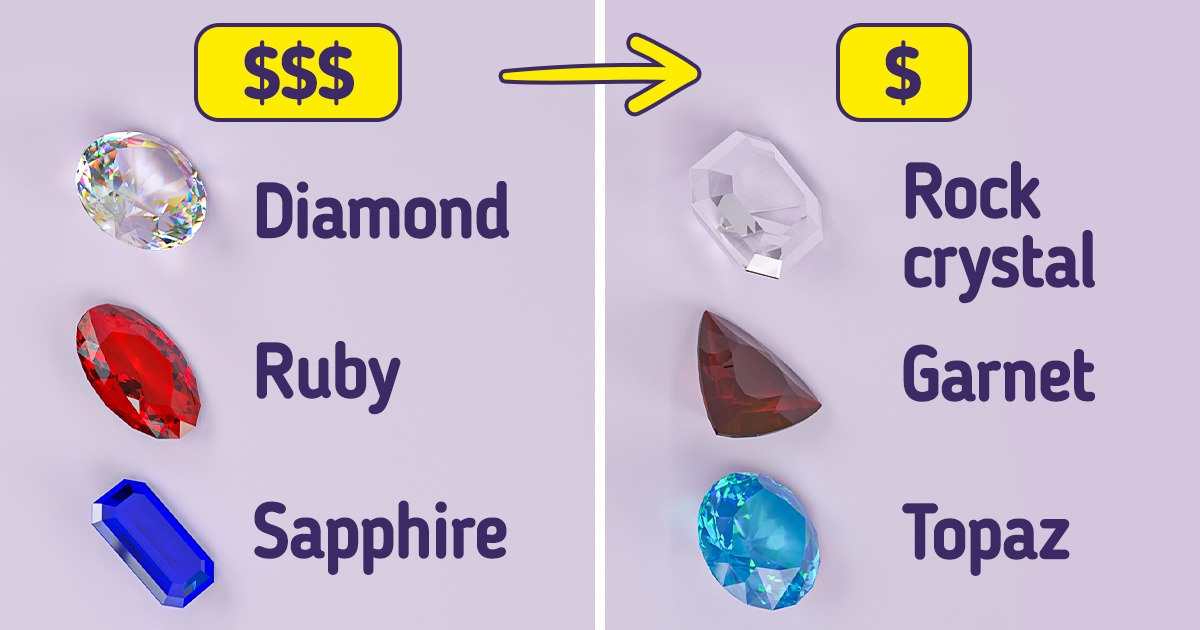 A Guide to Gemstones

It’s commonly believed that all stones used to make jewelry are precious. But in reality, only a few gemstones are precious, the rest are called semi-precious.

5-Minute Crafts studied the most popular precious and semi-precious stones and their characteristics.

The terms “precious” and “semi-precious” can be misleading because you may think that some stones are more valuable than others. However, this is not quite true.

In reality, a gemstone is a mineral, rock, or organic substance that, after being cut and polished, becomes a piece of jewelry or another accessory. The main characteristics of any precious gemstone are rarity, durability, and beauty, while semi-precious stones have only 1 or 2 of these characteristics.

The most valuable and rare gemstones are diamonds, emeralds, rubies, and sapphires. All other gemstones are classified as semi-precious.

Some rocks and organic materials also belong to gemstones. Among them are lapis lazuli, opal, pearl, and amber.

Diamonds are minerals composed of pure carbon, which has incredible hardness. To date, it is the hardest natural substance on the planet. Thanks to this quality, diamonds are used not only in jewelry but also for industrial purposes.

It’s commonly believed that a diamond is transparent. However, initially, the color of a diamond can vary from colorless to black. The color of a stone depends on the trace elements that got into its structure during the formation process.

The quality of rubies and sapphires directly depends on the rate of magma cooling during their formation. The slower it cools, the larger a stone will be.

Emerald is one of the varieties of beryl. This precious stone gets its noble green color due to the traces of chromium in it. However, there are also colorless, blue-green, yellow, and peach-pink emeralds but they’re extremely rare.

Beryl crystals have the unique feature of being able to reach enormous sizes.

Amethyst is the most valuable variety of quartz. Its distinguishing feature is a rich purple color, which the mineral gets due to radiation and iron impurities. The more iron in the composition, the darker the purple hue of the stone.

Amethyst is one of the few crystals that is often used in jewelry even in its natural state due to its high aesthetic qualities.

Garnet is not a specific stone, but a whole group of minerals that have a similar structure and properties. There are 6 main types, each with a slightly different chemical composition. All types of garnet can form in the same place, and sometimes a garnet can be a combination of types.

This stone is most often associated with a bright red color, however, the fact is that a garnet can be orange, yellow, green, purple, brown, blue, black, pink, and colorless.

Topaz is a fluorosilicate of aluminum and is one of the most popular semi-precious stones. It’s commonly believed that topazes are blue crystals, however, topazes can also be white, yellow, light gray, blue, orange, brown, green, or pink.

Rock crystal is the purest variety of quartz and is transparent and completely colorless. Due to these qualities, the crystal is used not only in jewelry but also for industrial purposes. For example, It’s used for the manufacture of prisms and lenses. In radio engineering, it is used to receive ultrasonic vibrations.

In jewelry, rock crystal is often used as an imitation diamond.