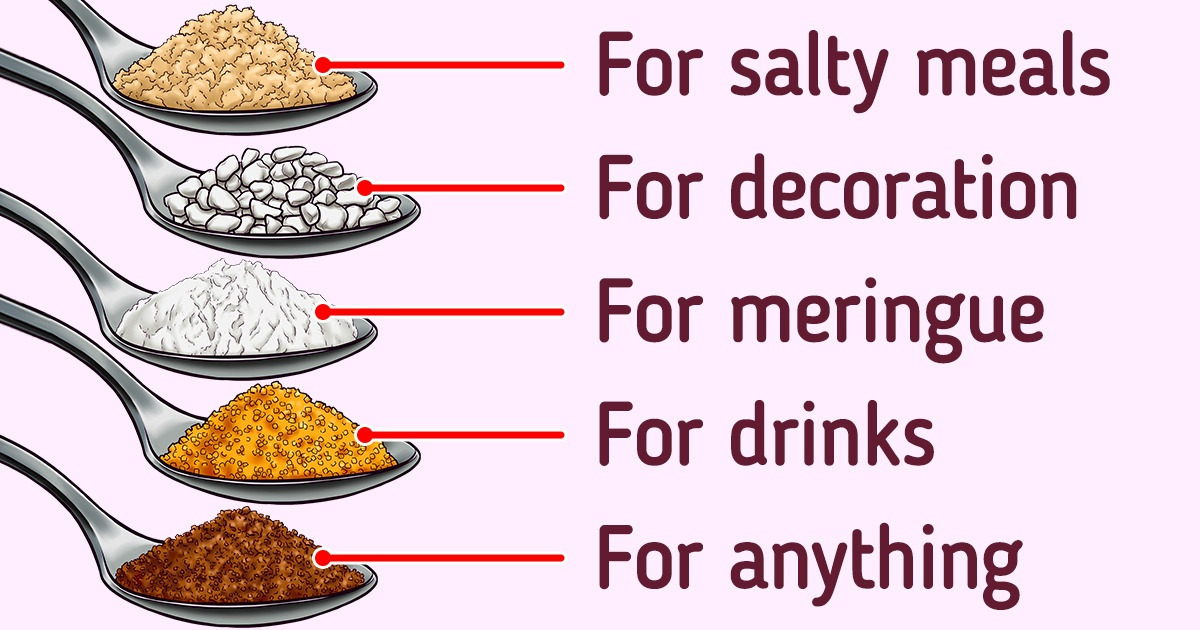 A Guide to Types of Sugar

Sugar is such an ordinary part of our diets that it’s hard to imagine how people lived without it for centuries. Back in the Middle Ages, sugar was considered to be a very expensive delicacy. But not everyone knows that there are lots of kinds of sugar that have their own features.

We at 5-Minute Crafts have made a guide on 10 types of sugar to help you know which types to use.

A few words about sugar

Granulated sugar is produced from sugar cane and sugar beets. It’s the most common type used in baking and cooking.

Pearl sugar is a kind of white sugar with a rough texture. Such sugar retains its shape and doesn’t melt at high temperatures. Pearl sugar is usually used in Scandinavian baking and to decorate pastries and buns.

Caster sugar is superfine, granulated, white sugar. Because the crystals are so fine, they dissolve much faster than standard sugar, which makes a powder, great for making meringues, syrups, and cocktails.

This is a fine powder dyed in different colors. To prevent clumping, it contains a bit of corn starch. Such sugar quickly dissolves in liquids and is perfect for making icing and frosting, as well as decorating baked goods.

Demerara sugar is a type of raw cane sugar that is minimally refined. It has large grains with an amber color and a natural, subtle molasses flavor. It’s best used in coffee and tea and in muffins, buns, biscuits, and cakes.

Muscovado sugar, also referred to as Barbados sugar, is a variety of unrefined cane sugar in which the molasses isn’t removed. It can be dark or light, has a sticky sandy texture, and has a rich, complex flavor. Even though it can be used instead of brown sugar, its taste is much more powerful. It’s used for barbecue sauce, marinades, and salty meals.

Turbinado is another type of minimally refined raw cane sugar. This type of sugar has large crystals or brown color, and it’s often mistaken for standard brown sugar because of its color but they are not the same. Turbinado has a tender caramel taste and is usually used in drinks and pastries.

Light brown sugar is refined white sugar with a small amount of molasses. It has a wet, sandy texture and is a bit less sticky than muscovado. It has a tender caramel taste. It can be used for pastries and for salty meals.

Like its lighter counterpart, dark brown sugar is refined white sugar with molasses. It contains more molasses than light brown sugar, which gives it a more powerful and intense flavor. Light brown and dark brown types of sugar can be used interchangeably.