How to Build Trust Online: 6 Ways

A Guide to Different Types of Tires

How to Find the Proper Desk Size

How to Know Your Hat Size

What the Differences Between the Giant Panda and Other Bears Are

What a Leap Year Is, and How to Calculate It

How to Quickly Cook a Pie Using Ready-Made Pastry Dough, with 5 Filling Options

How to Feel Fresh In the Morning 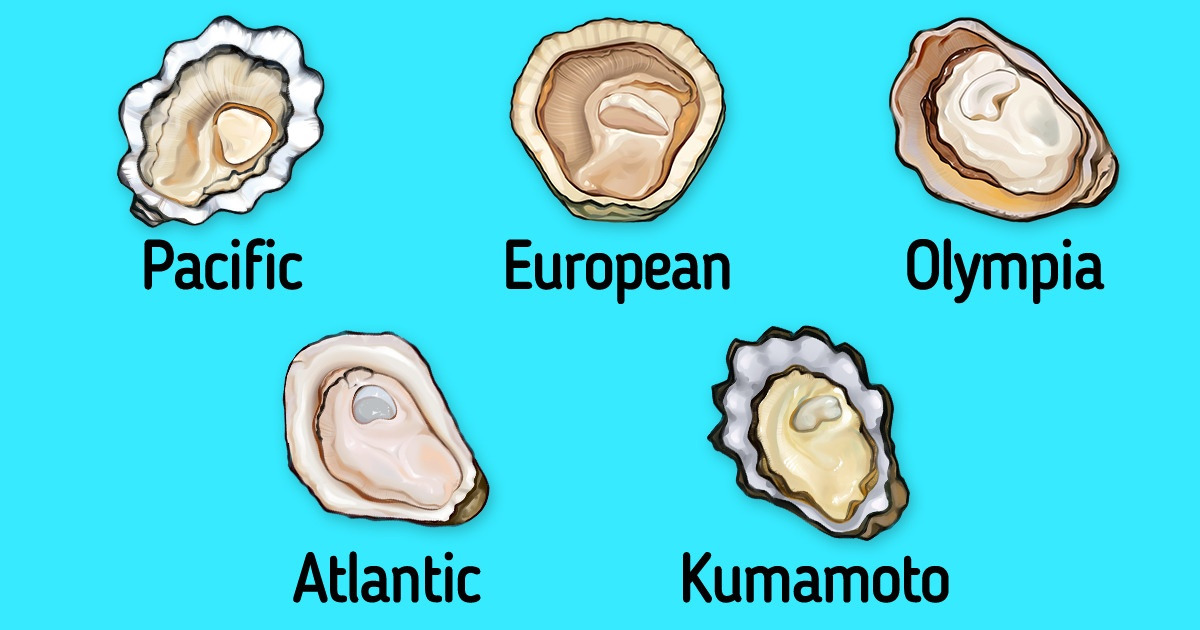 Different Kinds of Oysters, and What You Should Know About Them

The taste of every oyster is unique and depends on the conditions it grew in. We know around 200 kinds of oysters. Nowadays, cafes and restaurants serve big, small, salty and soft, western and eastern kinds. Such diversity on the menu can be really confusing.

5-Minute Crafts has prepared a guide to help you find out more about the most popular kinds of oysters and not get confused at a place that serves them.

In the nineteenth century, oysters were at the peak of popularity. But by 1900, their population dropped significantly due to uncontrolled harvesting and water pollution. Today, 95% of all the oysters people eat are grown on farms because the number of mussels in wild nature has not recovered yet.

Fresh oysters are rich in zinc: 6 average-sized oysters provide 220% of the daily norm. They also contain a lot of vitamins and other substances, such as B12, C, D, E, magnesium, selenium, iron, and others, plus aminoacids. Oysters don’t contain a lot of fat or calories.

How to tell a fresh oyster from a bad one

Freshness is the most important indicator of oyster quality because it really affects the taste.

You can tell a fresh oyster from a not-so-fresh one this way:

What to do at a place that serves oysters

Experts recommend ordering no more than 4-6 different kinds of oysters. 2 items of each kind will allow you to try all the nuances in taste and not get confused.

Here are a few simple steps to help you enjoy this delicacy when it has already been served:

Pacific oysters (Crassostrea gigas) are the most popular kind in the world. They have a small size and a soft sweet taste with herbal, fruit, and vegetable notes. The shell is more fluted, and it’s deep and clean white inside. The shell is cream color in the middle with small “hairs.” The ideal half-shell size is 2 to 4.5 inches with a 2:3 width/length ratio.

Atlantic oysters (Crassostrea virginica, Bluepoints, Wellfleets, Malpeques, Beausoleils) have been around 78% of all the harvested wild oysters since 1990. Their shell is smoother and it looks like a drop. It’s recommended to choose deep ones with a non-transparent oyster inside, a prominent adductor muscle. The optimal half-shell size is between 2 to 4 inches in length with a 2:3 to 3:4 width/length ratio. The taste can be earthy or like a mushroom, but it mostly depends on the water temperature and the area where it grew.

Olympia oysters (Ostrea lurida, Ostrea conchaphila) were decimated at the beginning of the twentieth century due to environmental pollution and extreme harvesting. For decades, they were believed to be extinct. But today, wild populations exist and are protected. For food purposes, they are specially grown. Olympia oysters are not very big, they look like a guitar pluck. On the inside, the shell is light, from a creamy to olive color, and with a lustrous or pearlescent glaze. The meat is usually non-transparent, white, or creamy. The oysters have a rich smell with metal, copper, earthy, and spicy notes. The size should be about 2 inches long, flat.

Kumamoto (Crassostrea sikamea) used to be believed to be the same as Pacific, but they are a separate kind. They have deep shells with sharp edges. The bottom shell has distinctive cat paw fluting. The oysters have a small lump of sweet, cucumber, and melon rind meat. They are low in salinity and are usually described as sweet with fruit or grassy vegetal flavors. The size should be no bigger than 2 inches long.

European oysters (Ostrea edulis, Flat, Belon) were brought from the Netherlands into America in the 1950s. The thick shells are round, flat on the top, and curved at the bottom. On the outer side, there should be circles of growth. Non-transparent meat is preferable. This kind of oyster is meaty, crunchy, sweet, and creamy with notes of seaweed and an umami taste. The optimal half-shell size is 3 to 4 inches because big ones are usually dry and small ones are underdeveloped.

Some facts about oysters

----
5-Minute Crafts/Tricks/Different Kinds of Oysters, and What You Should Know About Them
Share This Article