How to Choose Shoes According to Your Foot Shape 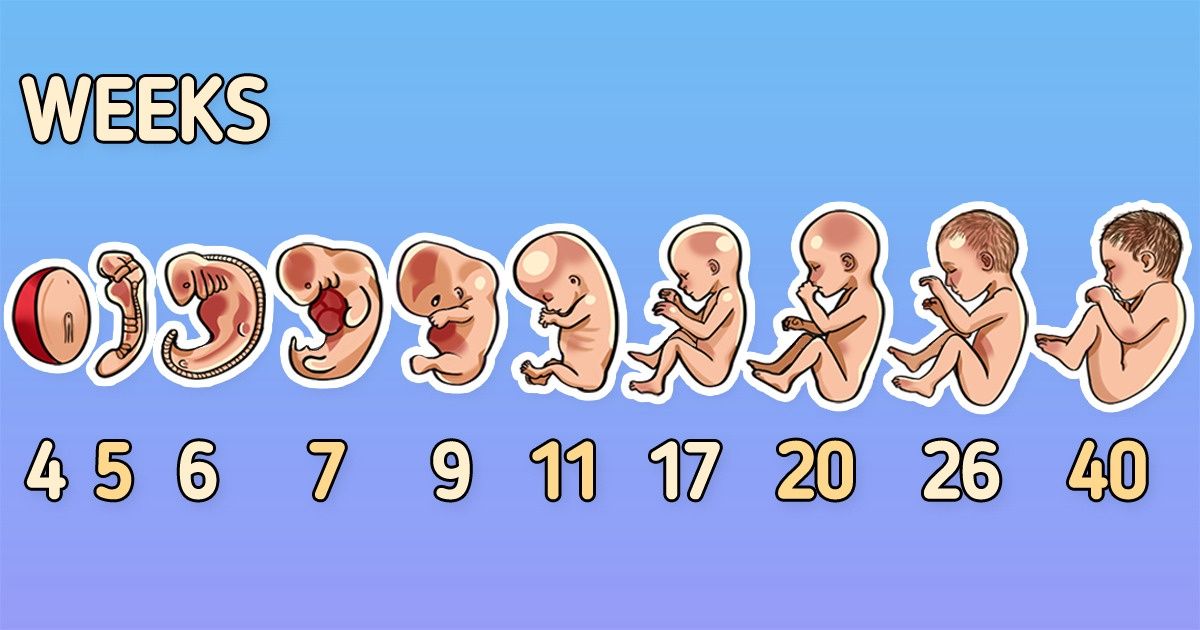 How a Baby Develops in the Womb

The process of the creation of life is like a miracle. 2 tiny cells grow day after day and become a new separate organism. A human pregnancy lasts for 40 weeks. During this time, a tiny zygote grows many times bigger and becomes a new person.

5-Minute Crafts would like to tell you about how a fetus develops from the moment of conception to childbirth.

How and when a pregnancy starts

Every month, a woman’s body that is of reproductive age goes through a cycle that can end either in pregnancy or a menstrual period (if a pregnancy hasn’t occurred). The cycle that ends with pregnancy has several stages. First, a group of eggs forms in the woman’s ovary which develops in small, fluid-filled cysts called follicles. The follicle containing the egg, which becomes mature, suppresses all the other follicles in the group. After that, it opens and releases the egg which is ready for fertilization from the ovary into the fallopian tube. This moment is called ovulation.

After ovulation, the opened follicle develops into a temporary gland called the corpus luteum. This releases the hormones progesterone and estrogen. Progesterone, for example, helps prepare the lining of the uterus, the place where a fertilized egg settles to develop.

The first trimester is the period of time from conception to 12 weeks. During this time, the fertilized egg changes from a small grouping of cells to a fetus that will start developing a baby’s features.

The first month after conception (weeks 1 through 4)

Within first 24 hours, the fertilized egg begins rapidly dividing into many cells. It remains in the fallopian tube for about 3 days after conception and then passes slowly to the uterus.

In the uterus, the egg leaves its protective shell and attaches to the endometrium (the lining of the uterus). When the implantation is complete, the endometrium begins to thicken and the opening between the uterus and the birth canal is sealed by a plug of mucus.

During the first 3 weeks, an embryo is being formed from the fertilized egg. The term embryo is used until the eighth week and after that it’s called a fetus, until the baby is born.

As the egg grows, a water-tight sac forms around it, gradually filling with fluid. This is called the amniotic sac. It helps protect the growing embryo.

During this time, the placenta also develops which transfers nutrients from the mother to the fetus, and transfers waste from the fetus.

In these first few weeks, the embryo will get basic facial contours and circulation will begin. By the end of the fourth week, the tiny “heart” tube will beat 65 times a minute.

On the fourth week, the embryo will reach the size of a poppy seed.

The second month (weeks 5 through 8)

Gradually, the brain and spinal cord start to form from the neural tube, which are fully formed by the 7th week. By this time, the fetal brain already consists of 3 regions: the forebrain, the midbrain, and the hindbrain. And it continues to actively develop.

The digestive system starts to develop. The stomach, esophagus, liver, and pancreas are being formed.

The limbs appear, looking like tiny paddles, which will eventually grow into arms and legs.

During the eighth week, the respiratory system begins to form and the baby starts making its first movements, which are still too weak for the mother to feel.

4 separate chambers form in the baby’s heart. The brain is actively developing. The size of the head increases significantly, which is about half the length of the entire fetus during this period.

By week 9 and 10 tooth buds develop in each gum, which will remain there until they cut through. By the tenth week, the teeth begin to harden and connect to the jawbone.

During week 10, the eyelids cover the baby’s eyes, which will remain closed until 27 weeks. And by the end of the eleventh week, the baby’s external genitals will start developing.

During week 12, the first reflexes appear in the baby: its mouth will make sucking movements and the fingers will begin to open and close. By this time, the arms and legs of the fetus already have 10 fingers and 10 toes, and peach-fuzz hair begins to grow on their skin.

By the end of the third month, all the main structures of the fetus are fully formed.

During this period of pregnancy, the fetus starts to actively develop facial features. The mother also starts to feel movement, and she can find out whether she’s going to have a boy or a girl with the help of an ultrasound. Usually, this is done during week 20.

At the beginning of the second trimester, the baby’s facial muscles begin to work out. It learns to make various facial expressions, chew, and suck its thumb. By this time, the baby looks more and more like a little person. It already has hair, eyebrows, and eyelashes. During week 13, fine lines begin to form on the fingers of the fetus, which will later become fingerprints. A little later, thin translucent fingernails and toenails will also appear.

The active development of the body begins. The neck becomes more distinct, separating the head from the torso. The arms become proportional to the rest of the body and the legs develop. Over the next few weeks, the fetus will double its weight and gain a few inches in length. The baby’s heart is now pumping about 25 quarts of blood each day, and this amount will continue to increase as the baby develops.

By week 13, the baby begins to produce meconium, which the mother will find in the first diapers after birth.

During week 15, the fetus begins to develop taste buds, which will be fully formed by week 20.

During week 17, the baby’s skeleton becomes harder, the cartilage tissue in it is replaced by bone. Sweat glands begin to develop.

By week 18, the fetal lungs branch out, the smaller structures — bronchioles — begin to develop, at the tips of which air sacs (alveoli) are formed. When the baby is born, these sacs enmeshed with tiny blood vessels, will allow oxygenated blood to circulate to all of the body’s organs and tissues.

In girls, the fallopian tubes are formed and are already in place.

During week 19, the baby’s arms and legs become in proportion to each other and the rest of the body. The areas for smell, touch, taste, hearing, and vision appear in the brain. The fetus can already hear the mother’s heartbeat.

During week 20, when the baby’s legs are no longer curled up against its torso, measurements are taken from head to toe (before that the baby was measured from its head to its bottom).

During week 22, the child is able to distinguish only faint sounds inside the mother’s body, such as breathing, heartbeat, or the sounds of the digestive tract. Then by week 23, it can hear sounds coming from the outside, for example, a dog barking.

During the sixth month, the digestive tract is activated in the baby’s body, which will fully operate after the baby is born. And although the fetus is nourished through the umbilical cord before birth, wave-like movements check the functioning of the digestive system and serve as a practice for it.

The respiratory system continues to develop, preparing the baby for breathing outside of the mother’s womb.

During this period, the baby has quite a lean figure, although its body is already formed and fully proportional. Its skin is still thin and translucent. But soon the baby will begin to plump up, and the skin will become more and more similar to the one we are used to seeing in babies.

The seventh month (weeks 25 through 28)
During this time, more and more hair appears on the baby’s body and it already has a certain color and texture.

During week 26, the baby can already hear a wide range of sounds, as well as distinguish the mother’s voice. It can respond to these stimuli with changes in heartbeat, breathing, and movement.

By week 27, the baby’s eyes can already respond to light, and the eyelids are able to close and open. If you shine a flashlight at the tummy, the mother may feel the baby respond with a burst of flutters and wiggles.

From this period, the mother can also feel light rhythmic movements inside her tummy. These are baby hiccups that can become common in the next few weeks.

The baby’s brain continues to develop actively. During this period, billions of new nerve cells appear in it, and its weight increases. A little later, in the third trimester, convoluted grooves appear in the brain that provide extra surface area without taking up more room in the skull.

During the third trimester, the fetus gains weight quickly which it will need after birth.

❗ Please note: Although popular culture mentions only 9 months of pregnancy, the typical full-term pregnancy is 40 weeks and can last up to 10 months.

The bones harden and the fetus is moving a lot.

From week 30, the baby is able to see dim shapes. The pupils are able to constrict and expand, allowing the eyes to let in more or less light. During week 32, the baby becomes able to focus on large objects at close range.

Active weight gain is in progress. Over the next 7 weeks, the baby will gain from 1/3 to 1/2 of its total birth weight.

The baby continues to gain weight. The wrinkles on its skin smooth out and the skin becomes less transparent and red.

The fetus already has coordinated reflexes: it can blink, close its eyes, turn its head, clench and unclench its fingers, and respond to light, sounds, and touch. The fetal lungs and kidneys are fully developed, and the liver begins to partially fulfill its functions.

Despite the fact that all the main organs and tissues have already been formed by this time, the baby still continues to gain weight. The layer of fat that the baby accumulates in the womb during this period will help it control its body temperature after birth.