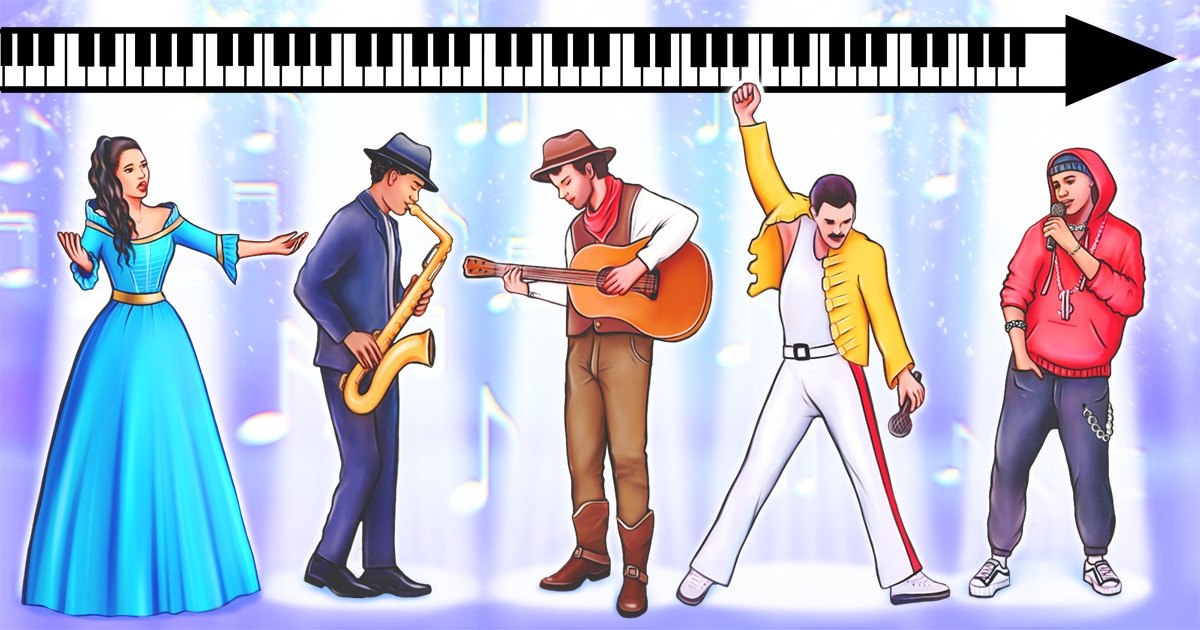 What the Different Music Genres Are

There are so many music genres, styles, and sub-genres to listen to that sometimes it gets confusing when categorizing songs. That being said, 5-Minute Crafts has highlighted some of the major genres, video examples for each, and many artists for you to follow down below.

Opera features vocal performances in a theater where the story is told through music. It’s sung by the actors who sing their lines. Opera is an important part of Western classical music. A small group of artists, statesmen, writers, and musicians in Florence, called the Florentine Camerata, wanted to recreate Greek storytelling through music. That’s how the genre was born more than 400 years ago during the Renaissance.

This music is usually developed by composers, historically by Giuseppe Verdi, Richard Wagner, Mozart, and many others.

Jazz includes so much flexibility that it’s not included in other genres typically. It has a blend of rhythms and tempos, chord progressions, sophisticated harmonies, and skilled improvisations. It can be played solo and also comprises a lot of instrumental structures and setups.

In jazz music, you may find a drummer and a bass instrument and sometimes a group of instruments, ranging from woodwind to stringed instruments, like guitars and violins too. There are many jazz styles to explore, like bebop, cool jazz, fusion, and other subgenres.

This music genre has its roots in the Southern US and has flourished from a mix of various fold styles. It focuses on a sound called “twang” of a guitar or vocals. Usually, the songs are slow and a tad bit bouncy too. It also takes its cues from Irish and Celtic folk, traditional ballads in English, as well as cowboy songs. Today, there are many sub-genres of country songs, like country pop, country rock, and neo-country.

This genre originated in the African American communities in the 1940s and is an umbrella term for other genres, like funk, soul, doo-wop, hip-hop, pop, and rock. R&B has its own sound, but nowadays, it’s tricky to guess what actual R&B sounds like. Hence, exploring the old bits will definitely help.

The Blues was originally played in the nineteenth century by a solo performer singing with a banjo or guitar. And in the 1960s, the genre kept evolving with instruments like the bass, electric guitars, and drums. Then it kept spreading across the Atlantic to the UK and more. Blues uses a specific chord structure, as it is a simplistic genre to its core. However, it does add complex layers on top that make more talented guitarists drawn to it.

This genre consists of uptempo dance music that became famous during the ’70s. Some assertions have been made that disco music is more of a reaction against the domination of rock music and disapproval of dance music during that era. Apart from being a genre, disco became a subculture too in the 1970s. In musical terms, it has 4-on-the-floor beats and syncopated bass lines, horns, electric piano, strings, electric guitar, and synthesizers.

The genre was produced in the US in the ’70s by inner-city African Americans as well as Latin Americans in the Bronx neighborhood of NYC. Hip-hop is usually featured by a back “beat” in the form of a loop or sample. Many artists make their own beats, but a few play their own instruments too, like, for instance, the Beastie Boys.

When it comes to vocals, they could be in the form of rhythmic yelling, chanting or rapping, or even spitting rhymes. This is called rap music.

Pop music, also known as popular music, is a genre that keeps evolving and features any music that is composed for an audience. Any song played on the mainstream radio can be deemed as pop. From the genre of Motown to metal, hip-hop to drum and bass, pop music has encompassed and flourished them all.

Rock music is also called “rock ’n’ roll” and originated in the late ’40s and early ’50s when mostly African American musicians wished to deliver explicit lyrics and performance styles. In the ’60s, its influence spread to English-speaking countries and Europe, when The Beatles was formed in Liverpool and The Rolling Stones was formed in London.

This genre usually features a driving beat, and the most common musical instruments you’ll hear in rock music are drums, guitar, and bass. Sometimes keyboards, horns, and other instruments are used as well. Rock is a simple genre, ranging from its chord progressions to riffs and harmonies.

Electronic music was originated in the 1920s and 1930s when the first electronic instruments were introduced and the first compositions were written. As time went by, technological advancements kept taking place, and electronic music is now one of the fastest-growing music genres across the world.

This genre can be called dance music and usually refers to any music that showcases non-organic as well as pre-programmed virtual instruments. Other genres, like “electronic dance music” or “EDM” are also included in this category.

This musical genre originated as independent, underground music of the ’70s era and became more famous in the ’90s. What makes alternative rock special is that it’s quite abstract in the lyrical sense. When it comes to music, it may sound like punk rock but the chord progressions are usually very unique.

Metal or heavy metal is a harder form of the rock genre that features heavier guitars, shrieking vocals, and faster drums. This genre has led to countless other sub-genres as well.