© 2014–2022 TheSoul Publishing.
All rights reserved. All materials on this site are copyrighted and may not be used unless authorized by the 5-Minute Crafts.
1-1-

A Guide to Different Types of Tires

13 Types of Sunglasses That Can Protect Your Eyes This Summer

What Crab Sticks Are Made From

How to Know Your Hat Size

How to Feel Fresh In the Morning

How to Build Trust Online: 6 Ways

How to Quickly Cook a Pie Using Ready-Made Pastry Dough, with 5 Filling Options

What a Leap Year Is, and How to Calculate It 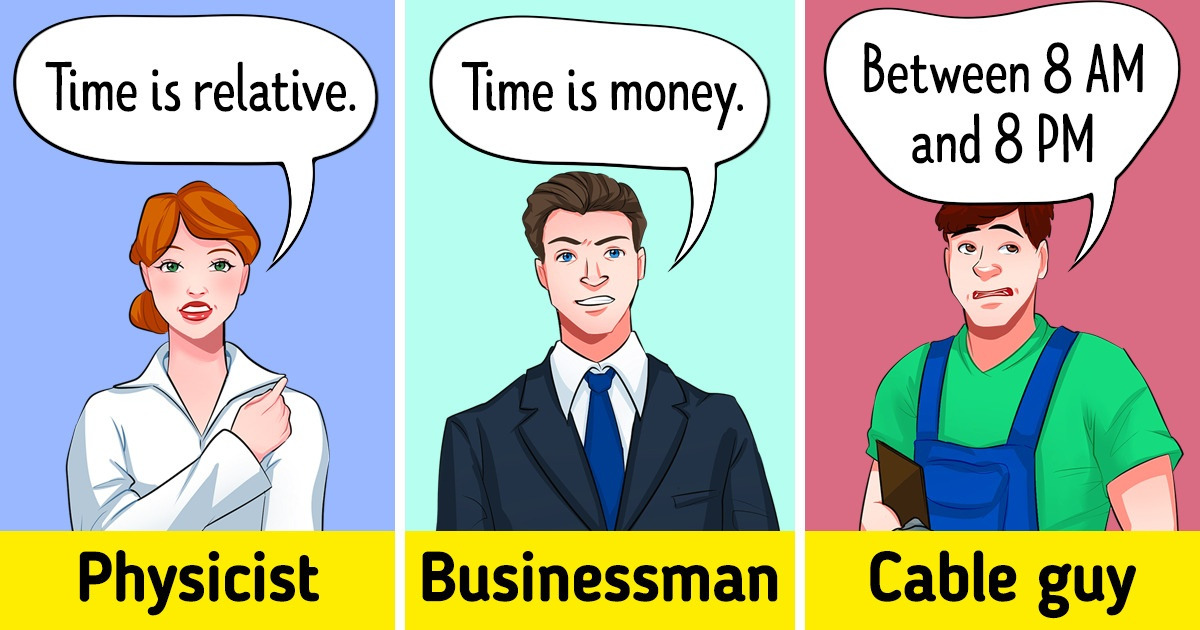 Clocks measure time, and the information we receive tells us the duration of the event, how and when it occurred, which event happened before, etc. It keeps the universe ticking. We usually associate time with clocks and calendars, but when thinking about its fundamental nature, there are numerous theories. While every field has its own definition, 5-Minute Crafts decided to help you understand time in an easier way.

A: a scientific definition of time

Time is an unstoppable and consistent change in our surroundings; it is a steady passing of events before our eyes. It is represented through change, like, for instance, the moon orbiting around Earth. Time passing is very intricately connected with the concept of space.

This proves that time isn’t a universal unit, but more like a relative measurement. It keeps changing when the speed of the objects changes or if they’re subjected to varying gravity levels as well. Einstein’s theory of general relativity states that gravity is the reason why there are changes or distortions in spacetime. The more gravity there is, the more it curves the spacetime, and the more time slows down.

The arrow of time

Scientists also confirm that time moves forward. According to the second law of thermodynamics, everything in the universe wants to go from low to high entropy, or from uniformity to chaos, even the beginning of the universe by the means of the Big Bang to moving to ever-expanding galaxies and their inhabitants today. This is referred to as the “arrow of time” or “time’s arrow.”

For instance, if you see a star in its uniformity, but later see it explode into a supernova and turn into a scattered nebula, it means that time has moved forward from equality to chaos.

Time perception refers to a person’s subjective experience of time or duration of events, which may differ according to different people in different circumstances. Physical time is an objective experience, but psychological time is subjective and sometimes malleable too. You may have heard common phrases like, “Time flies when you’re having fun,” or “Time goes by fast when you’re older,” etc.

One reason why it feels like time flies by quickly when we’re having fun is because of the chemicals in the brain called the neurotransmitter dopamine. This chemical is secreted by our neurons and it makes us feel rewarded. So when you are having fun, these cells work very actively, meaning more dopamine is released, leaving you feeling that less time has passed than it actually has. On the other hand, when you are bored, less dopamine is released, and time seems to slow down.

Age is another factor to consider when it comes to time perception. When you’re a kid, your brain receives new information to process it properly and presents it in a way that is understandable to you. When the information is familiar, it doesn’t take much time to process, but the new information does take its own sweet time to do so. This is why childhood may seem long but an old person’s routine may feel like it’s slipping away faster and faster. This is why we look at our younger years and say, “Where did the time go?”