© 2014–2021 TheSoul Publishing.
All rights reserved. All materials on this site are copyrighted and may not be used unless authorized by the 5-Minute Crafts.
----
184

How to Make Tom Yum

What Sourdough Is, and How to Make It

How to Make Pineapple Upside-Down Cake

How to Dye Easter Eggs

How to Save on Food When Traveling

How to Boil Cauliflower

How to Make Chicken-Vegetable Soup 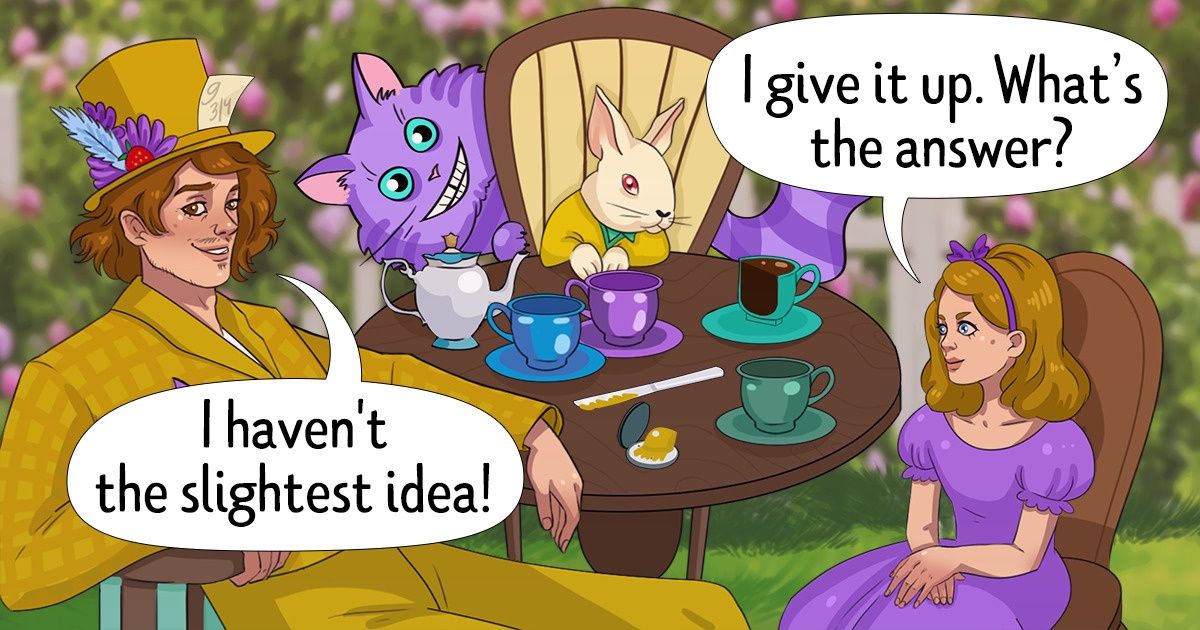 “Why is a raven like a writing desk?” This popular riddle has been bothering the minds of people for one and half centuries. It was first written by Lewis Carroll, the author of Alice’s Adventures in Wonderland. By the way, he himself answered this question, and it’s so ambiguous that it raises even more questions.

We at 5-Minute Crafts decided to gather the most popular versions of the answers in order to bring some clarity into the “raven and writing desk” riddle.

What it all started from

Lewis Carroll’s book, Alice’s Adventures in Wonderland, was published in 1865. As many of you know, this novel is about the adventures of a girl named Alice in a fantasy land where incredible things happen to her. She had a talk with the Cheshire Cat who could disappear, she listened to lectures of a talking Caterpillar, she chased the White Rabbit, and met the Mock Turtle who had the head of a bull. But the most absurd event Alice experienced was the mad tea party, where she met the Hatter, the March Hare, and the very tired Dormouse.

It’s during this mad tea party that the Hatter asked Alice the very question: “Why is a raven like a writing desk?” But it wasn’t just Alice who couldn’t answer it. The Hatter didn’t have the solution either.

After the publication of the book, Lewis Carroll was bombarded with letters from avid fans of the novel, seeking the answer to this tricky question. The writer got so tired of it that in the foreword to the 1896-year edition of the book, he wrote, “Because it can produce a few notes, though they are very flat; and it is nevАr put with the wrong end in front!”

The word, “notes” doesn’t only mean “a single tone of the definite pitch made by a musical instrument or the human voice,” but also “a brief record of facts, topics, or thoughts, remark.” The word, “flat,” in its turn, can also mean both “smooth and even” and “primitive.” Perhaps if Carroll was speaking about notes as remarks, he could be hinting at the popular poem, “The Raven” by Edgar Allan Poe. In this poem, the main character talks to the Raven and the Raven keeps saying to him “flat,” the monotonous word, “nevermore,” again and again. The parallel with Edgar Allan Poe’s poem was drawn by the famous American chess player and riddle-creator, Sam Loyd. He offered his answer to the question about the raven and the writing desk, which sounded like “Poe wrote on both.”

Regarding the second part of Carroll’s answer, the author intentionally made a mistake in the word “never” and wrote it as “nevAr.” If you read this word backward, you’ll get the word, “raven.” This intentional mistake explains the meaning of the phrase, “It is never put with the wrong end in front.”

Having answered the question that had been bothering readers for so long, Lewis Carroll seems to have puzzled everyone even more. That’s why more and more answers to this riddle have continued to appear since then. Different authors offered their interpretations. For example, in Stephen King’s book, The Shining, he mentions this question and gives an ironic answer, “The higher the fewer, of course! Have another cup of tea!”

Aldous Huxley, the author of the famous dystopian novel, Brave New World, wrote in his philosophical article, “Ravens and Writing Desks,” which was published in Vanity Fair magazine in 1928, the following answer: “If I ask, for example, why a raven is like a writing desk, I can either reply: because there’s a b in both, or else: because there’s an n in neither.” Huxley is talking about the words “raven” and “writing-desk” — neither of them contains the letter b, and both of them have the letter n. But then he explains his absurd answer in the following way: “It really makes no difference. Each answer is equally true and equally false. They are nonsensical riddles, questions asked not about reality but about words.”

Many authors provide answers based solely on the untranslatable twist of words. One such answer was published in 2017 and sounded like: “Because one is a crow with a bill, while the other is a bureau with a quill!”

We at 5-Minute Crafts editorial like the version that the answer lies in the quill: both may be penned, but they can never truly be captive. How would you answer this question?