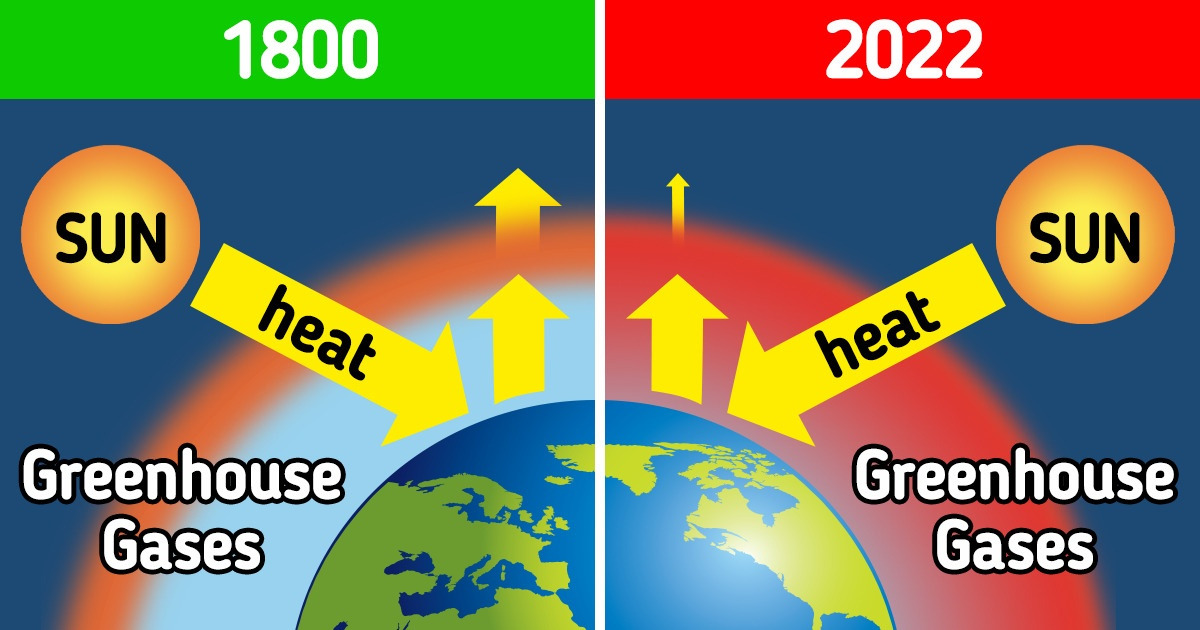 What the Greenhouse Effect Is

Nowadays, it’s very common to hear the concept of the “greenhouse effect” due to the serious climate crisis planet Earth is going through. However, it’s likely that many people still wonder what this natural process is and how it affects our lives.

5-Minute Crafts will teach you what the greenhouse effect is, the impact humans have on it, and what we can do about it.

❗ Important: This article has been created for informative purposes only and does not represent a scientific report. Moreover, the dates on the preview are just a very general indication of the mechanisms of the pre-industrial and post-industrial eras regarding climate change.

How the greenhouse effect works

First of all, it’s important to understand that the greenhouse effect is the natural process that, when balanced, maintains the Earth’s surface at a comfortable temperature, which allows life to exist by keeping the planet at about 91ºF (33ºC) warmer than it would really be. Otherwise, our planet would be a frozen place, impossible to inhabit.

As the name suggests, the greenhouse effect works pretty much like a greenhouse that stays warm on the inside: When the energy coming from the sun touches the Earth’s atmosphere, some of this energy is reflected and goes back into space, while some of it gets trapped and re-radiated by greenhouse gases, such as carbon dioxide, nitrous oxide, ozone, methane, and certain artificial chemicals, like chlorofluorocarbons. This absorbed energy warms the Earth’s surface and the atmosphere.

How humans are changing the greenhouse effect

Unfortunately, human activities such as burning fossil fuels, deforestation, and farming are changing this natural process by increasing greenhouse gas concentrations, which leads to a larger greenhouse effect.

In other words, a higher amount of these greenhouse gases can result in the Earth’s atmosphere trapping more and more heat and, therefore, the Earth warming up even more, which is also known as global warming.

The consequences of global warming

Global warming, which is fueled by greenhouse gas emissions produced by humans, is impacting the climate systems on our planet in different ways. For instance:

How to reduce the greenhouse effect

There are two main things we can do to prevent the amount of greenhouse gases from increasing even more: Stop releasing them into the air and improve our planet’s ability to take them out of the air. This is also known as climate mitigation, which involves a series of different solutions, including:

Preview photo credit Depositphotos.com
----
5-Minute Crafts/Life/What the Greenhouse Effect Is
Share This Article
You may like these articles